The Final Days of Session

07 Jun The Final Days of Session

Things have been moving quickly on a handful of my bills. Check out what’s been going on in Majority Leader Land™:

Senate Dems have also been making a whole lot of progress in these final few weeks of session. All of the following bills have passed the Senate, and will either head to the House for final votes, or head to the Governor’s desk for signature: 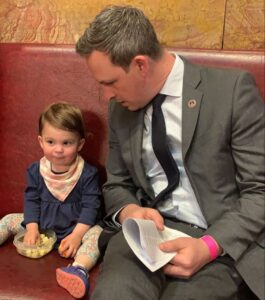 Although we originally hoped to wrap things up by end of May, there’s still too much good stuff to get done. We still need to take further action on solidifying our state’s climate action goals, to help families and small businesses continuing to struggle financially, make our tax system more fair and progressive, and advance voting rights.

So, the plan is to keep working as long as it takes to get it all done – until we’re cut off by the constitutional 120 day deadline that falls on June 12th, that is.

And as we wrap up, I’m relying on only my most trusted advisors. Namely, my daughter Isa.

If only you knew the policy debates we get into…