Bills, A Budget, And Baseball

08 Apr Bills, A Budget, And Baseball

Somehow we already find ourselves at the halfway point of the 2021 session. As we finalize the budget this week, we’re on track for a very busy second half of session.

Our budget funds all day-to-day operations of state government – everything from education to energy projects, from healthcare to hospitals. The $34 billion budget is truly a labor of love from our Joint Budget Committee to the state and people of Colorado, and it will ensure that no one is left behind during our recovery.

Additionally, we recently introduced another round of stimulus bills that address restaurant, event and agriculture industries, workforce development, and mental health. Relief is on the way.

What’s on the horizon? 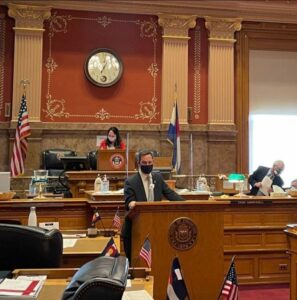 A few weeks ago we rolled out the details of a bill to address Colorado’s transportation funding packages. We’re getting closer to introducing this critical piece of legislation, so keep an eye out for more details soon. In the meantime, I’d suggest reading up on Biden’s $2 trillion infrastructure plan (and the growing possibility of a Front Range rail line!).

Gun reform policies are starting to take shape. Conversations are continuing as we discuss potential legislation to address gun violence in our communities. That being said, we’re not going to rush into any quick decisions. I want to
make sure any policy we introduce will have a meaningful impact for the people of Colorado, and will actually save lives. More to come soon.

The MLB All-Star Game was relocated from Atlanta to Denver in response to Georgia’s extremely restrictive voting laws. I’m a fan of baseball, but an even bigger fan of democracy. I’m proud to live in a state that can boast such a secure and accessible voting system. I’ll gladly take any chance to celebrate Colorado’s gold standard election system, especially while enjoying a beer at Coors Field.